Today the Lakewood area serves as a popular get-away for visitors from the Green Bay, Appleton, and Fond du Lac, Wisconsin areas. The close proximity to these small population centers and the relative isolation from major cities such as Chicago and Minneapolis continue to make the Lakewood area popular. The extreme distance to major air-hubs and other 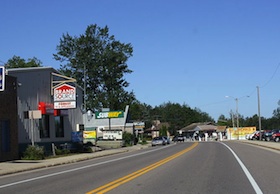 transportation centers make the area virtually off-limits to those from other parts of the country and help to keep the number of tourists and visitors to a minimum, further adding to the area's appeal for Wisconsinites.

There were 399 households out of which 22.6% had children under the age of 18 living with them, 63.7% were married couples living together, 3.3% had a female householder with no husband present, and 29.3% were non-families. 26.3% of all households were made up of individuals and 13.0% had someone living alone who was 65 years of age or older. The
average household size was 2.19 and the average family size was 2.60.

For many years the primary industry of Lakewood was timber, but in recent decades this has

changed to the service industry. Most of the local revenue is generated by the tourist trade. The Chequamegon-Nicolet National Forest, which surrounds the area, is a working forest that has been clear-cut in the past and cut-over many times. As recently as the 1950s the Lakewood area was known for its virgin timber and pristine nature, but aggressive logging and clear-cutting significantly changed the face of the area. The Holt and Balcolm logging company set aside one tract of land in which they did not cut the original growth. This area, called the "Cathedral of Pines", was preserved as a result of the efforts of Lucy Rumsey Holt who influenced her husband, logger W.A. Holt, to leave it as virgin timber. Mrs. Holt used this 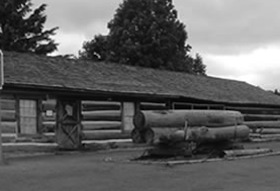 area to teach Bible studies to her children and did not want the area disturbed. This 200 to 400 year old white pine and balsam old growth stand is also home to a Great blue heron rookery.

McCaslin Brook (also spelled McCauslin) was used as a means of transporting large quantities of logs to saw-mills or for transportation to major cities where the timber would be sold. The oldest logging camp in the United States can be found on what is now the McCaslin Brook Golf Course.

Enjoy this aerial view of the greater Lakewood area!